Compounding – What is it and How Does it Work? 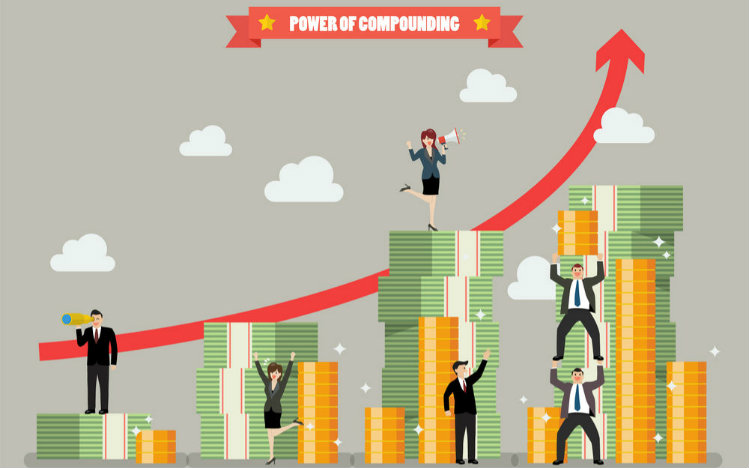 If you’ve ever made any type of financial investment, you probably heard of the term compounding.

Compounding plays a pivotal role in retirement savings as well. Without it, your 401(k) or IRA would never grow to the amount you need to comfortably retire on. The basic concept is that the earnings from your investment are then reinvested. The investment will continue to earn both on the original principle, in addition to the reinvested earnings. In short, this is referred to as “exponential growth.” We’ll discuss the concept even further, provide examples and relate compounding to your retirement plan.

Compounding – What is It?

Compounding, also known as compounding interest, is defined as “the process in which an asset’s earnings, from either capital gains or interest, are reinvested to generate additional earnings over time.” This is what allows an investment to grow faster than if it just had linear growth. Therefore, the better the returns on your investment, the faster it will grow.

A quick example: Let’s say you have $5,000 in an investment and it grows 10% annually. After the first year, the investment will be worth $5,500. In year two, the 10% growth is based on the entire $5,500 amount. Instead of earning on just the original principle, your earnings are based on the principle plus the interest accrued during the first year. The growth for year two would be $550. The investment is now worth $6,050.

As you can see, the earning power of your investment continues to grow faster each year. Of course, investments don’t generally grow at a constant rate. Some years will perform better than others. However, that doesn’t stop the compounding growth.

Compounding and Your Retirement Plan

Whether you have a Self-Directed IRA, Solo 401(k), Roth 401(k) or SIMPLE IRA, compounding works the same way. The major difference in retirement plans is when your funds are taxed. Traditional plans are funded with pre-tax money. The funds in the account grow tax-deferred. Instead of paying taxes upfront, you only pay taxes when you start withdrawing during retirement. On the other hand, Roth plans are funded with after-tax money. Contributions are made with after-tax money. However, all withdrawals during retirement are tax-free.

Since plans are taxed differently, you need more money to fund a Roth than you do with a traditional retirement plan. Let’s say you want to invest $100 in both a traditional and Roth IRA. Funding the traditional IRA is straight forward. The $100 is taken out pre-tax and is deposited directly to the IRA. However, since you pay taxes on Roth contributions first, you need to take that into consideration. Let’s assume you pay 20% in taxes (which are taken out of each paycheck). This would leave you with only $80 to fund your Roth (since $20 was taken out for taxes). You would need to make up that difference to make a “true” $100 contribution.

The good news regarding Roth plans is that you only pay taxes on the contributions. You’ll never be taxed on the earnings they make (assuming you wait until age 59 1/2 to withdraw). On the other hand, you must pay taxes on the entire withdrawal of traditional plans. This includes both the contributions and the earnings they accrued throughout the years.

The biggest eye opener is when you compare savings in your retirement plan and those that are invested outside of retirement. Let’s compare two people who decide to invest at the same time. All parameters will be the same except Person A will invest inside a 401(k) plan and Person B will invest using personal funds.

Each of our example people will contribute $1,000 annually starting at age 25 and continue until age 70. This will be $45,000 in total savings out of pocket. Their investments will each earn 10% annually. Person A will have accrued $790,795.00 in his 401(k) plan. However, Person B will only have $356,969.00 in personal funds. Person A will have twice as much money as Person B. WHY? In addition to the power of compounding that both people enjoyed, Person A also had the benefit of tax-deferral. Person B had to pay taxes every year, which took away from his final amount.

Compounding is a great way to increase your investment’s earning power. However, when coupled with the tax advantages of retirement accounts, it’s unbeatable. Do yourself a favor, and start contributing to your retirement. The sooner you get started and the more money you can contribute, the more the power of compounding will benefit you.

If you have any questions about the idea of compounding, or any other concepts, please reach out to us. We’re here M-F from 9am-7pm EDT. You can call us @800-472-0646 or drop us an email at [email protected].