The Backdoor Roth IRA has allowed all income earners the ability to make a Roth IRA contribution.  Prior to 2010, any taxpayer that had income above $100,000 was not allowed to do a Roth IRA conversion which prevented one from making an after-tax IRA contribution and converting to a Roth.  The 2009 financial crisis caused a change in law as the Treasury was in desperate need of tax revenue and Roth conversions are a simple way of accelerating tax payments. Hence, in 2010 the Backdoor Roth IRA was born.

Read More: How to Contribute $70,000 Plus to a Self-Directed Roth IRA

How Does The Backdoor Roth IRA Work?

Below is an example how the Backdoor Roth IRA solution works:

Pam is married, and she and her husband have income over $228,000.  Pam could not make a Roth IRA contribution because her income is too high.  Thus, Pam can make a traditional IRA contribution and not take a tax deduction (after-tax contribution) and can then immediately convert the after-tax funds to Roth. There would be no tax on the conversion from after-tax to Roth, although, if Pam had other pretax IRAs at the time of the conversion, the amount converted to Roth could be limited based on a pro rata conversion requirement.

I used IRA Financial to complete my Backdoor Roth IRA. Thank you IRA Financial for all your help! My customer service representative was amazing. 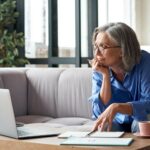 In November 2021, the House narrowly passed the Build Back Better (“BBB”) bill, the centerpiece of President Biden’s domestic agenda on Friday, approving $2.2 trillion in spending over the next decade to battle climate change, expand health care and reweave the nation’s social safety net, over the unanimous opposition of Republicans.  However, as a result of Sen. Joe Manchin, D-W.Va opposition, the Bill was not able to pass the Senate as is currently dormant.  The Bill contains a number of retirement related provisions, including a provision that would eliminate the conversion of after-tax contributions to Roth for 2022 and beyond, thereby, killing the Backdoor Roth IRA solution.

So the question is, will the BBB be passed in 2022 and will the bill eliminate the Backdoor Roth IRA for 2022 and beyond?   No one really knows, but there is a good chance some revised form of the BBB will pass the Senate in 2022.  Accordingly, there is a strong chance the BBB will include a provision eliminating the Backdoor Roth IRA. Although, it is unclear if the provision would apply to 2022 or be pushed back a year until 2023.  The belief is that if the BBB does not get passed before March 2022, there is a solid chance the Bill will allow for Backdoor Roth IRA conversions in 2022 but eliminate them for 2023 and beyond.

As of March 2022, the Backdoor Roth IRA is still alive.  Therefore, any taxpayer making more than $214,000 in income and is married and filing jointly can make an after-tax Traditional IRA contribution and then potentially do a tax-free Roth IRA conversion.  However, depending on if and when the BBB bill gets passed, and whether the backdoor elimination provision remains in the bill, 2022 may be the last year for the Backdoor Roth IRA solution. While we cannot predict the future, IRA Financial can still help you complete the Backdoor Roth today!